An alumni of St Stephen’s College in the University of Delhi, Nidhi pursued post graduate education at Oxford University and the Sorbonne and post-experience Management education at Harvard Business School. His professional life exposed him to diverse business responsibilities, especially in the manufacturing sector.

Born into one of India’s oldest industrialist families, he was brought up surrounded by a business and industry culture since childhood. Nidhi cherishes the spiritual environment prevalent in his home, where Vedas, Upanishads were a part of his home schooling.

Nidhi’s father, the late Ramkrishna Dalmia was one of the top three industrialists in India for several decades. He was a pioneer in several new industrial fields and by dint of hard work and innovation rose as a self-made industrialist to the top, in a career spanning both British India and Independent India (since 1947). His major interests included Cement, Chemicals, Jute, paper, Textiles, Sugar, Aviation, Insurance, banking, Newspapers, Dairy Products, Bakery Products and Electric Supply, to name only some. His business empire subsequently split up into a number of independent groups within the family.

Ramkrishna Dalmia almost managed to persuade Jinnah the creator of Pakistan, who was a close friend of his not to partition the country. Ramkrishna Dalmia’s visit to the UK and the US in the early 1950s in pursuit of his ideal of One World Government got considerable media attention specially in the US.

Nidhi was in his College Table tennis team at Oxford and also enjoys Tennis and Swimming. His interests include Cinema, Theatre, Opera and Classical music. At heart Nidhi is a wanderer and a romantic. He divides his time between Delhi and Paris.

Harp is his first novel. 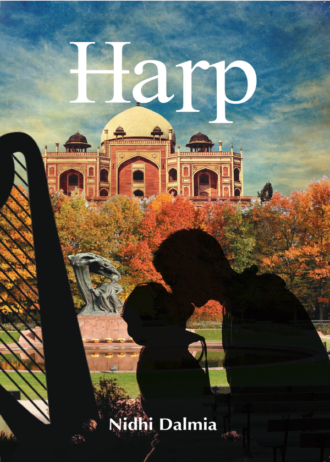 Moving through India, Europe and USA, Harp follows the lives of these three young people even as they engage with the cultural, sexual, student revolutions, and the music of the sixties.