Author bears a name popular in south India, but he belongs to Uttar Pradesh where he was born in a small place called Waira-Ferozepur in District Bulandshahr in 1950. His schooling was in New Delhi and he graduated with Economics (Honours) from Hindu College, Delhi in 1972. Next he joined Indian Police Service in 1975. He was allotted to Bihar where he served in the police department till 2000. After bifurcation of the state, he was allotted to the new state of Jharkhand.

However, in 2005 he faced a false criminal case from which he was acquitted after a very long trial in 2017. This was a very “valuable” experience which brought him many insights while writing the book.

His main passion all throughout has been the pursuit of knowledge as enlightenment than to follow the rut of a knowledge professional who teaches this or that discipline in a university department. He calls it bureaucratization of knowledge. In a way, the present book may be treated as a protest against this bureaucratization which was first introduced by Aristotle more than two thousand years ago through his Organon.

Author has mostly thought than written or published or lectured. His emphasis is on the original thinking, howsoever deviant, than being “inspired” from what others have thought, lectured or taught.

However, he published a few articles in the Hindi journal Aajkal in the 1990’s, including the one dealing with a rare subject specially for the Hindi readership. This was about the comparative analysis of the social revolutionary voice in the work of two great contemporaries living in India and France, namely Sant Kabir and Francois Rabelais.

Then in 2003-04 he published three articles in the English journal Think India edited by late D. P. Tripathi, M.P., Rajya Sabha, namely “A Theory of Indian Communalism”, “Against the Age of Feuillteonism” and “On the Idea of Kreutzer Sonata”. They give a glimpse of some of the ideas which contributed to his worldview philosophy in the next fifteen years or so, though the theory of political organization and international politics was substantially worked out later. 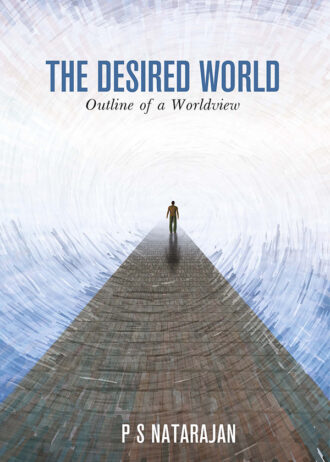 The Desired World: Outline of a Worldview

The Desired World is all about how to make some personal sense out of a world not looked at as a cosmic order, a divine dispensation, or to be read as a scientific and mathematical text, but to view it ultimately as total chaos.